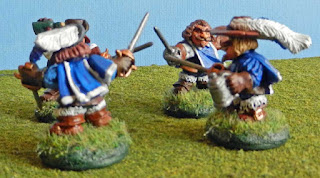 And one for all!

These are the first of a number of dwarf musketeers, which I received through a kickstarter last year. They are from Iron Mask Miniatures. The size and style fits in well with GW/Citadel dwarves and Foundry dwarves. They come with separate hands and some bodies come with separate heads, but they fit together very well. And both the heads and the hands (with the deep gloves) have plenty of surface area in contact with the neck area and the ends of the arms so there's a good bond. I think they will hold up well to handling. I did replace the thin blades of a couple of the swords with pieces of wire from paperclips with the end filed to a dull point, but otherwise no pinning was needed for the heads or hands. With a variety of heads and hands and bodies there are almost endless ways you can put them together. Lots of character, too, with options like hands holding items other than swords.

There are also some character figures and a number of musketeers mounted on shaggy ponies.

The kickstarter for this project was run by Gary Price, and you could tell it was a labor of love. And it was well-run. I will definitely keep an eye out for any future projects in this line.

These guys are the reason I was on the lookout for swashbuckling/3 Musketeers sorts of rules. I picked up Two Hour Wargames' By Savvy and Steel to try out (one of these days!), and also Flashing Steel by Ganesha Games. I haven't tried out either set of rules yet...
Posted by Fitz-Badger at 2:58 PM 6 comments:

First up are some specialists, from left to right: rocket launcher, sergeant, communications, flame thrower, medic

Next, regular troops, with an officer in the middle

And last but not least, more regular troops and a shaman/psionic mage/priest (the blue guy in the middle with the pole thingamabob - the top part of the psionic device can come off and be replaced by a wooden plaque with a frog emblem which also came with the figures) 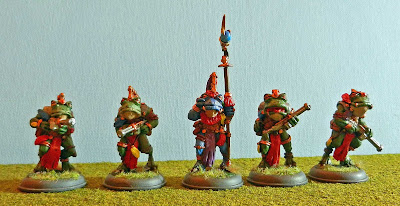 I got these Phroggs from RPE (Ral Partha Europe) through kickstarter. They are taller than your average 28mm human figure; around 8 feet tall or so in scale. At the time I backed the project I wasn't sure what I would use them for, but I thought they looked cool. Then recently I also backed a sci-fi game called Battlestations (2nd Ed.) and I wonder if I could work them into that. The sculpts are great, each one is different, with lots of character. Fun to paint!.
Posted by Fitz-Badger at 8:40 AM 5 comments:

I recently got a copy of the Dragon Rampant rules  by Daniel Mersey from Osprey. On my initial read-through it looked like a good, fairly simple, yet nuanced set of rules. I worked out a couple of small 20 point armies that I could put together with miniatures I already have.

I played the basic "bloodbath" scenario, which is simply a straight up battle without any objectives other than destroying the enemy army.

I didn't find any rules about placing terrain so I just plopped down a small hill on one flank and some woods on the other, about equidistant from both armies. Then I placed the units in what seemed like a good arrangement, keeping in mind the minimum 3 inch spacing between units.

The cards are handwritten with unit stats. They  don't need to accompany the units; I just did that for convenience. The round piece of mdf in the lower right is a 3 inch piece I had previously cut out for a tree stand. I found it useful for making sure I kept the minimum 3 inch spacing between units at all times.

The view from the goblin leader's position:

Because of the activation rules you won't always get to use all units every turn, so that introduces some good uncertainty for a solo gamer. I had times where I would only get 1 or 2 units activated and other times when I got them all activated.

Early in the game:
The dwarves have managed to get their crossbowmen onto the hill on the left and into the woods on the right. The goblin archers have been forced back, and a couple if units on both sides have taken a few casualties (I placed them back at the baselines, so I could quickly count up how many a unit had lost. Useful for when you have to make a courage test.).

Nearing the end of the game:
The dwarves are really whittling down the goblin army. Once it got to the point of only the wolfriders still in play for the goblins I stopped and called it a win for the dwarves.

Fun, quick, didn't take a lot of figures or table space (the table is about 3 feet by 4 feet). I like these rules and went ahead and ordered Lion Rampant as well. I also got En Garde, another Osprey rules book, but that doesn't look so appealing to me. It seems to lack the simplicity of the Rampant rules, and doesn't seem like there's much swashbuckling in it. I also noticed 1 picture seems to be used 3 times, in this one short book! I also like that the Rampant rules credit the miniatures by manufacturer and who painted them/who they belong to. I guess it shows that you can't always judge a book by its publisher (or by books you might think were related).

A big thumbs up for the Rampant books. A big thumbs down for En Garde. I have some dwarf musketeers that I am slowly working on putting together to paint, so I'll be on the look out for some rules to use with them. Ganesha Games' Flashing Steel might be a possibility. I'm hoping for some rules that are fairly simple, with some swashbuckling fun (like improvised weapons, repartee, etc.), but at more like hero and small unit level rather than a fuller character level rpg kind of game nor more of a battle-level game
Posted by Fitz-Badger at 1:35 PM 8 comments: