This post contains assorted dwarves, mostly GW, some Citadel, and maybe 1 or 2 from other manufacturers. Most of these guys have been in my collection for a while (some from the late 70's or early 80's).
First up a couple of adventurers, a Norse dwarf, and a dwarf commander

An adventurer, a Freestone dwarf, and a dwarf ranger/woodsman (I think the first one is a Foundry miniature)

The Dwarf with No Name, a crazed old trollslayer, and a dwarf pirate.

A dwarven fort I build quite a while ago when I first started making stuff with HirstArts blocks. The top comes off. The "join" is obvious. If I built this again today I would probably do the top a bit differently to make the join less obvious. 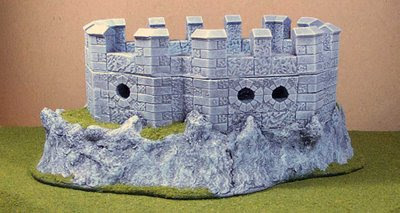 Posted by Fitz-Badger at 5:15 PM No comments:

Slayer king (the flag is a GW flag on sticky paper) 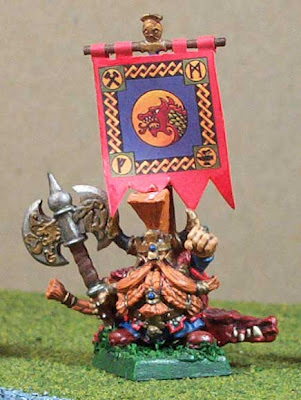 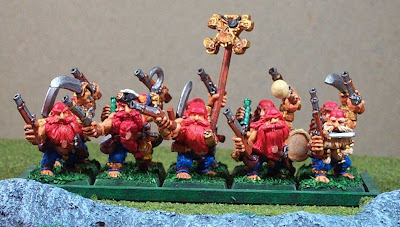 Posted by Fitz-Badger at 9:44 PM No comments: 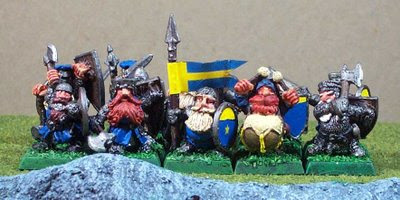 Regular dwarven army, armed with crossbows and hand axes, troop B (the minis are original Bugman's Rangers from the olden days) 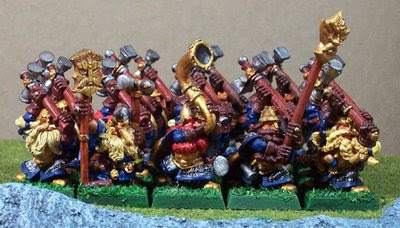 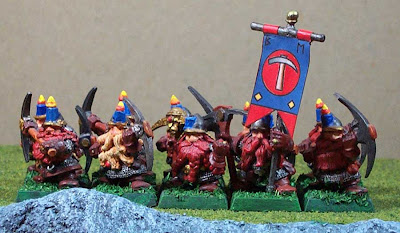 Posted by Fitz-Badger at 9:31 PM No comments:

Engineer in charge of artillery 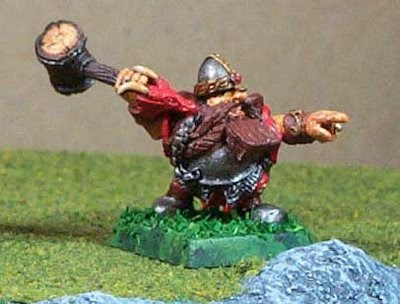 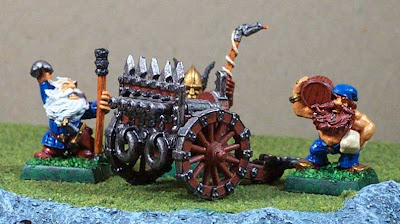 Draft pony - a very old mini (I think it was a Citadel pony from a set of Middle Earth figures). I sculpted on the harness with "greenstuff". 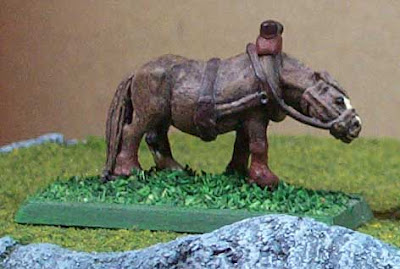 Mule and cart, because sometimes you need to transport stuff! Posted by Fitz-Badger at 9:21 PM No comments:

The next several posts will show my existing dwarves, starting with those of the Beerstone kingdom.

This first picture shows some of my older dwarf miniatures. I'm not even sure of the manufacturer of some of these. From left to right, the king's fool, a bear, King Zurik Frostbeard himself, Mrs. Frostbeard?, and the royal wizard (he is an old Citadel dwarf from back in the day when there were dwarf wizards in the GW "world").

The rest of the dwarves is this post are from Games Workshop, unless otherwise noted.

Longbeards, these are old veteran dwarves. I made the shield bosses from various plastic bits from GW's boxed set of plastic dwarves. I also changed the heads of some of the weapons, using weapon heads from the plastics. I find the plastic miniatures too fiddly to assemble, but the sets are a great source of bits for conversions.
They are standing on a dwarven throne room I made from HirstArts blocks. 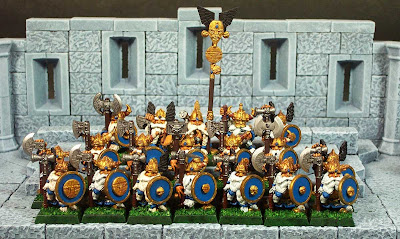 Various dwarven heroes and heroines. I haven't named most of them, but the fourth one from the left, the white-bearded fellow with the huge axe, is GW's White Dwarf (at least one of the incarnations in metal of the dwarf who represents GW's magazine, also called "White Dwarf"). I'm not sure if the female dwarf next to him is a GW miniature (I suspect she isn't, but can't remember where I got her). The female dwarf on the far right is Goldilocks, daughter of King Zurik Frostbeard.

Posted by Fitz-Badger at 4:39 PM No comments: