(with GW elf and Bad Squiddo dwarf for scale) 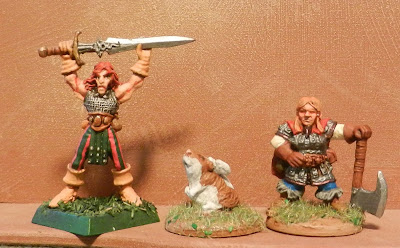 Presenting another batch of retro sci-fi figures from Hydra Miniatures. I tried to do eyes on some, but gave up and fell back on just slightly shaded eye sockets.

The "Rocketson" family (as listed in their catalog) - I based the paint scheme on the obvious inspiration.

"Galaxy City Gals" - for the 2 on either end I roughly based them on Star Trek women, as is probably evident. The one in the middle reminded me of people like Marcia Brady and Laurie Partridge, so I tried to capture that sort of look with the colors. 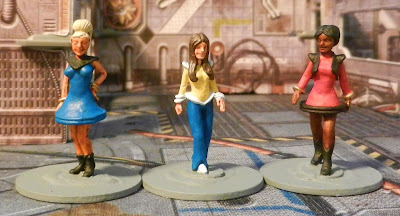 "Cosmic Kids" - the girl made me think of Alice in Wonderland, the boy in the middle made me think of a young Wesley Crusher ("shut up, Wesley"). I didn't have any ideas for the other boy; not sure if he was meant to look like anyone in particular.

A pair of "Centurion" robots, and a "Galaxy City Guy" - I have some of the robots without capes/cloaks, painted in a gun metal color, as a squad of regular robots; these 2 are more elite. The "guy" is just a generic civilian. 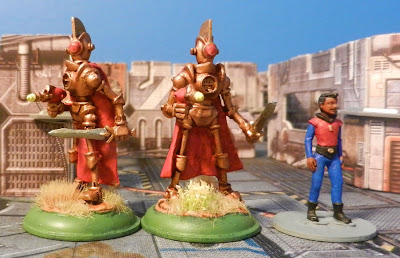