Finished a few more minis. I think these are all Reaper metal minis, mostly from fantasy lines, but I glued a hand with a laser pistol from the Heresy minis to the hand of the pirate elf to make her a space pirate elf. Any or all of them could be used as civilians in Core Space, and some (especially the pirate) could be used as crew or even a captain.

From left to right, space pirate elf (she's not really that much taller than the others, it's just that she's standing closer to the camera), fancy elf (ambassador, merchant, or other higher class civilian), alien pet, pirate lady or merchant? (human painted blue in time-honored sci-fi tradition), magic-user (psiker or merchant or other civilian type).


The pistol hand is one of the things I glued with super glue and then sprinkled with baking soda. Seems to be holding very well. I don't think it's ever going to come loose.
Posted by Fitz-Badger at 8:35 PM 5 comments:

More metal minis from Heresy Miniatures. I love these! Lots of character. Could work as station security or customs or similar types.

Some of them have names in my mind - Cliff on the left holding a cup of coffee, Pam next to him, then The Major (former military or just a wannabe?), Bert and Ernie (or is it Ernie and Bert?), Brewster on the far right)

Some of the same from different angles and a couple of others, plus a heroine/villain or other character type.

Pam and Cliff again, then Moriarty, The Major again, and unnamed woman (Woman with No Name?.

I will probably work up some way of using these in Core Space (sci-fi skirmish game from Battle Systems) eventually.
Posted by Fitz-Badger at 7:32 AM 7 comments:

I played a game of Operation Last Train. A set of free rules by Joseph McCullough.

The Starstuff Rifles sent in a team of crack riflemen (rifledwarves?) to rescue civilians from the bug infestation on Mimus 6. The team included 3 dwarf veterans armed with laser rifles, one armed with a machine gun, and a communications specialist armed with a pistol. 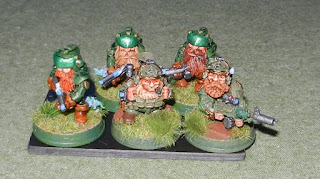 They arrived at the southern edge of the small settlement. To the northwest was one smaller farmhouse, another larger main house to the north, and a 2nd smaller house to the northeast. The landscape had scattered trees, equipment, rocks, etc, with some power conduits running through part of the center and along one side. The team already spotted several bugs. 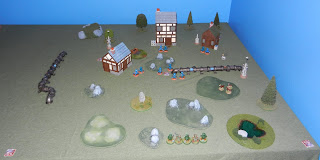 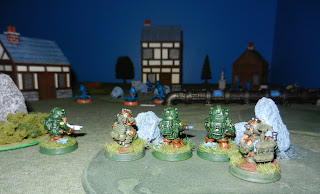 Moving forward the team opened fire and killed 2 of the nasty critters. First the team worked to clear out the central area where the most bugs were concentrated and of immediate danger. 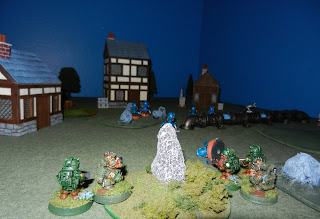 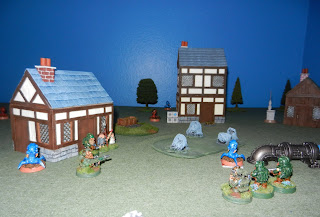 They discovered 2 civilians in the house to their left, as bugs started moving up. Still, they continued killing bugs as they advanced.

The team approached the main house, and killed more bugs, but the machine gun jammed. Luckily the gunner kept his head and quickly cleared the jam (played Quick Load/Clearance card). Once they reached the main house there was a fierce firefight. The team killed 4 bugs, at the cost of the machine gunning jamming again. They also found 10 more civilians sheltered there.

At this point the communications specialist made the call to bring in the dropship to evacuate the team and civilians. 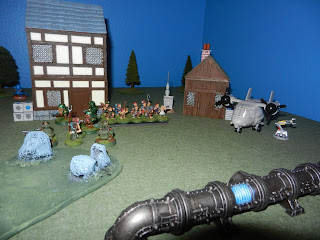 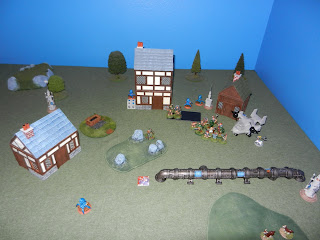 As the bugs were moving in and getting close enough to attack most of the civilians were loaded onto the dropship. One of the riflemen found himself in desperate hand to hand combat against one of the vile creatures and at first it looked like he had gone under. But it turned out he was Not Quite Dead (another card), and managed to fight back and kill the bug.

Meanwhile, the communications specialist rescued 3 more civilians from the other small house, as the rest of the team fought off the bugs. Then, once all of the civilians were on board the dropship the team boarded as well and they all departed the area.

These are metal minis from Heresy Miniatures. In most cases the arms were separate pieces, usually holding the weapon in one or both hands. In some cases the other arm was another piece. And for most the heads were also separate. The ones with separate heads came with 3 different head options - fully enclosed as I chose here, partial visor over just the eyes, or face fully exposed. Assembly was a bit tricky until I recalled reading about using baking soda with super glue. So I put glue on the parts, held them in place, and sprinkled a bit of baking soda on them. Seemed to make the glue cure quickly and the bond seems strong. I did have to scrape away a few spots where the glue was a bit thick and left some lumpy spots on the minis.

They could easily be painted in all sorts of color schemes, but I decided to go with a light gray, with touches of blue.

Seen here on some terrain from Battle Systems' Core Space game. The miniatures were not made for that game, but Core Space does have provisions for creating your own content in the Deluxe Guide. So I could adapt them for that or use them as proxies or in other sci-fi games such as Operation Last Train.

(the above shot shows the colors more true to life) 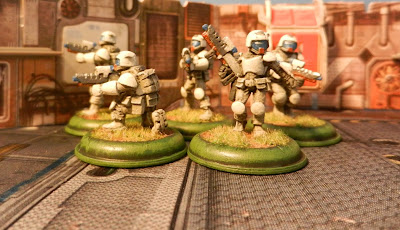 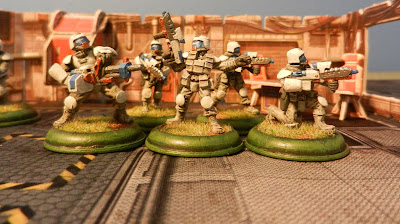 I pulled out all of my painted dwarf miniatures (as far as I know) and set them out for a group shot. Some of these are at least 2 or 3 decades old. I do have more unpainted ones to add some day. 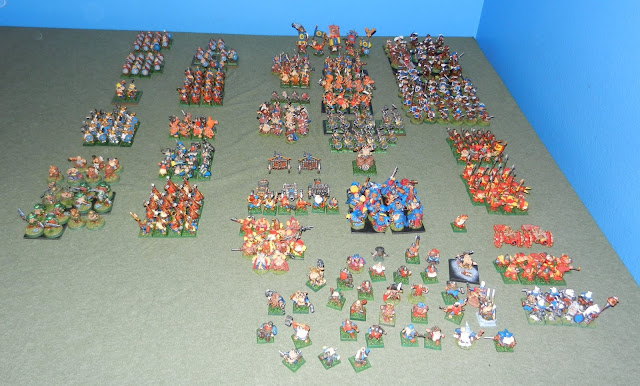 Some assorted dwarves from Lead Adventures Miniatures, explorers, miners, etc., and a "friend" (dragon from Super Dungeon Explore, which I have had for a number of years). 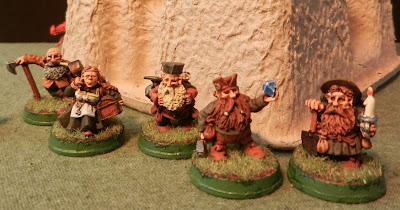 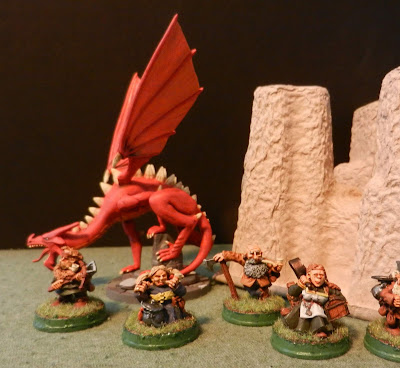 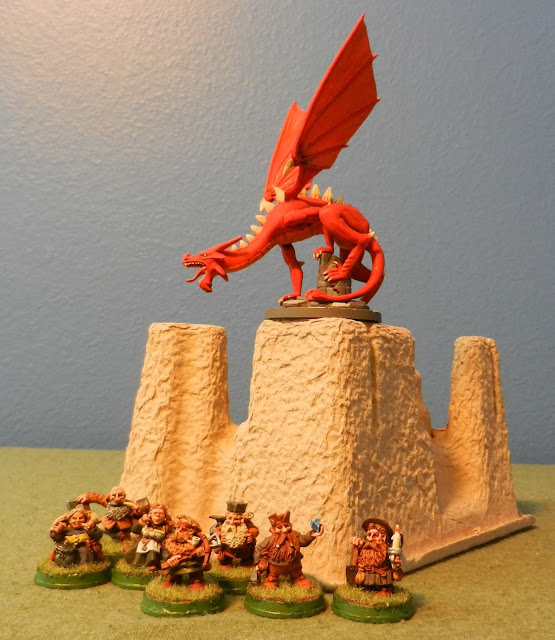 Space Stuff or These could be the droids you're looking for

Here are my latest - some droids, space dwarves and a couple of pieces of some sort of tech (good for objective markers), all from Lead Adventures Miniatures.