Slowly getting ready for what I hope will be an ongoing solo rpg game. I looked at a variety of fantasy rpg rules. For now I think I'm going to use Savage Worlds. At least that's what I will start with and see how it goes. I bought the Fantasy Character Generation Toolkit a couple of weeks ago and had fun rolling up a character. It's designed to provide a pretty extensive background, and generate various bonuses and drawbacks, for Savage World PCs for fantasy games.

The only things I didn't roll for were race and gender as I knew I wanted to start out with a male dwarf for my main character (or first character). So, without further ado, let me introduce Durik, son of Barik, son of Burin. Durik is a young dwarf about to set out on his first quest. 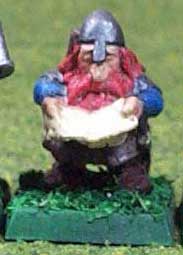 Background, as rolled up:

Dwarf Fortune - Bones of the Mountain: Your people are tough as their mountain home. Add 1 die of vigor.
Appearance - light brown hair, neatly trimmed beard, brown eyes, large nose, average build
Age - barely an adult
His family are minor merchants, operating out of a human city in the kingdom of Artesia. Add 2 die to Persuasion; start with 500 GP. His family has been in this area for about a dozen generations, driven from their homeland by war.
His father left home some years back, on a quest of his own. There has been no word, so they don't know if his father is alive or dead. His mother operates the family business and is in good health. He has a younger sister, in good health. She looks up to her big brother and tends to copy him, both physically and in life choices.
Hometown - small town. Add 1 die to Streetwise. It's in a hilly region. Not far away is a dwarven enclave, the small mining colony of Zhul Dhar (The Blue Hills). The family fits into the community and is well-accepted.

Durik's childhood events:
1. He had an imaginary friend, which is actually a guardian spirit. Add 1 "benny".
2. He developed a strong sense of Right and Wrong. Gains Code of Honor hindrance.
3. He received a good general education. Add 1 die to smarts.

Adolescence events:
1. Blessed by the gods with Nine Lives.
2. Continued Education. Add 1 die to Smarts.
3. Explorer: He took long forays into the wilds, often across the border of the kingdom into the Great Greenwood to the north. Add 1 die each to Climbing and Survival.

Professional life. Not settling into any one profession, counted as "generic" in the charts, which gives him +1 die each in Agility, Spirit, Strength, Vigor, Fighting, Gambling, Guts, Knowledge (1 craft), Notice, Persuasion, and Streetwise.
Jobs:
1. Ratcatcher. Add 1 die each to Notice and Tracking
2. Worked in the mines. Add 1 die each to Strength and Vigor.
3. Had time to read. Add 1 die to Smarts.

So, overall, a good well-rounded background. Not particularly distinguished, but with a few lucky breaks that will give him a better than average chance to survive long enough to have a chance at achieving some goals. His main goal to start with is to track down information about his father.

I will add some more details to this post and then probably create another post with his actual stats.
Posted by Fitz-Badger at 10:33 PM