I received the following minis through kickstarter last year. They are from Fanath (www.fanath.com) and very well made. I think they were 3D sculpted. Very clean, few visible mold lines. Some of the figures are single part and some come in 2 parts, but the parts are made in such a way that they fit together very well with lots of surface area for gluing. No pinning need at all. No gap-filling was needed either. They did stuff like making 2 arms and the shoulders/upper back all one piece that slotted into the other piece that comprised the rest of the body, legs, and head, and the joins fall in places where there is a natural separation, like between the shoulder pads and the frog's torso. And now I have a hard time telling which were 2 part and where the 2 parts fall. I should have taken some pics of the pieces prior to assembly. Other companies could take a lesson from these!

They are all metal. Only the bases are plastic (I used ones I bought in bulk from Reaper, although the frog team did come with a different style of round plastic base).

I have no plans to do any kind of "football" game, but in spite of a general lack of weapons I thought I could use these guys as swamp denizens in both fantasy and sci-fi adventures. They could work just as well for Pulp stories, too.

Without any further ado here they are:
(16 frogs, all different, and 1 sneaky chameleon) 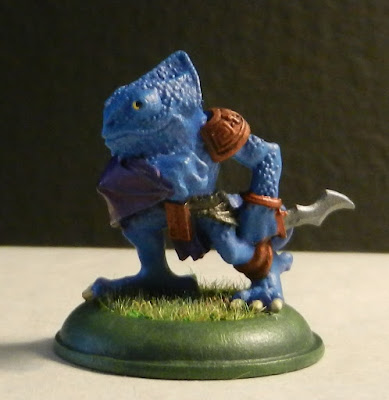